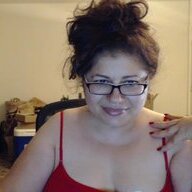 New to the forum, hoping to learn things & talk to intelligent people in the know holistically & spiritually (nothing to do with religion). Jan 8, 2020